My daughter was three and a half when I delivered my son.  I had these fears that I would not love him as much as I loved her.  I worried he would feel the distance and envy the bond his sister and I shared. I remember the night we were admitted, after my husband fell asleep on the hospital couch and for the brief moments no nurses were hustling through, I sat flipping through pictures of her on my phone, my heart aching to hold her.  I kept playing the perfect day we had just spend with her over in my mind: the park, her wild hair flying as she rolled down a grassy hill, sweaty kisses and “I love you, mommy.”

I knew what the morning would bring would change us all.  I had no idea how much.

Labor was as easy as they come.  He was born at 3:15pm on 3/16.  He was perfect.  He slipped into my arms as if they had been designed specifically for him all along and latched onto my body with ease, and I was engrossed in every twitch of his hand and flick of his cheeks.  Everything about him, about us, felt whole and perfect and familiar.  I was so relieved at how I felt: every piece of my being loved him so powerfully.  I could feel him coursing through my blood and I knew our bond was exactly as it should be.

It wasn’t until I saw her the next morning that I realized what had happened.  As she slept at Gramma and Grampa’s and I brought her brother into the world, something shifted.  I believe it to be a physiological phenomenon.  I’m not sure if science supports that, but that is the only way I can describe how it felt.  I was re-wired.

When I saw her walk timidly into the delivery room, her pink T-shirt emblazoned with “BIG SISTER” and her curls piled high on her head, I expected to feel excitement at introducing her to this new little person, but I didn’t.  I was anxious and fiercely protective of him.  She climbed into the bed with me and peaked over my shoulder at her sleeping brother.  I studied her eyes for intent to touch and readied myself to grab her hand if she tried.

“what is wrong with you? ” I thought to myself, “it’s Scout. Hug her and stop being weird.”

I wrapped my arm around her and pulled her in closer to myself and her brother, and that’s when I knew for sure something was wrong.  As I draped my arm around her and pulled her knees tight next to my body, I could feel the awkwardness.  I had held her like this a thousand times, each cuddle felt like the grooves of two perfectly carved puzzle pieces fitting together.  But now?  Now she felt enormous.  Her long arms and legs looked strange wrapped around my chest and tummy.  Her breath on my neck irritated my senses and the clamminess of her hands made my mind swim with worry of contamination.  Snuggling with Scout had been the highlight of all my days since becoming a mother, and now I was simply tolerating it.  And I hated that feeling.  Oh, how I hated it.  I wanted to be gushing with love and adoration for them both, but I wasn’t.  Finally, when she had tugged on the IV in my arm for the second time, I asked her dad to move her off the bed.  She cried for me.  She wailed.  I didn’t feel anything.  But the moment her brother grimaced and began to chew the back of his hand, all of my senses went wild with desire to comfort and nourish him.

The guilt was heavy.

I was so ashamed of myself.  What on earth was happening to me?  What were these feelings?  What happened to my bond with my daughter?  Will I ever get it back? Has this happened to anyone else before?

The following months were the hardest of my life.  I would spend evenings tucked away with the baby, nursing and rocking and soothing, as my husband struggled to get my screaming toddler in bed.  There were nights I sent her back to her bed after she had crawled in next to me for comfort.  There were days I sat watching her play alone as I nursed her brother in the corner of her bedroom.  There were afternoons I let her watch three hours of TV straight, just so I didn’t have to find ways to entertain her.  The guilt was an ever-present chasm in my heart.  But, I just could not function any other way.  I tried.  I really did.  But if I pressed it, if I turned off the TV and tried to sit and play with her, it would end in tears and shouting as I wouldn’t be able to give her the undivided attention she craved and she would inevitably act out to gain it, in doing so frying the last shred of patience I had in my body.  And she was so angry with me. I would kindly explain that I couldn’t play hide and seek, because I had to nurse baby, and she would just let out an ear-splitting scream at me.  Nothing I tried was working. We weren’t connecting. We weren’t communicating.  We were simply surviving.

I mourned out lost connection often. There would be moments it just hit me, and suddenly I would be flooded with emotions and heartbreak for my baby girl. I would tip toe into her room to watch her sleeping peacefully, it seemed like the only time she wasn’t spitting rage at me.

It’s been a year now.  My daughter has turned four years old, my son just celebrated his first birthday, and things are still a little lop-sided.  Now that I don’t have a newborn attached to me, and he can toddle around the room as I dress Disney princesses in Play Dough dresses, our world has become far more peaceful.  Now that each sound he makes doesn’t send my body into a series of sound-deciphering reactions, I can focus more on silly games and favorite stories.  Now that I can hand him to his dad without him shrieking and gasping for me, I can hold her as she falls asleep.  And it feels right again.  It’s not the same, but we’ve found a new groove.  We’ve re-cut our pieces to fit one another and that fit is getting tighter and more connected everyday in this new puzzle that has room for both of my babies. 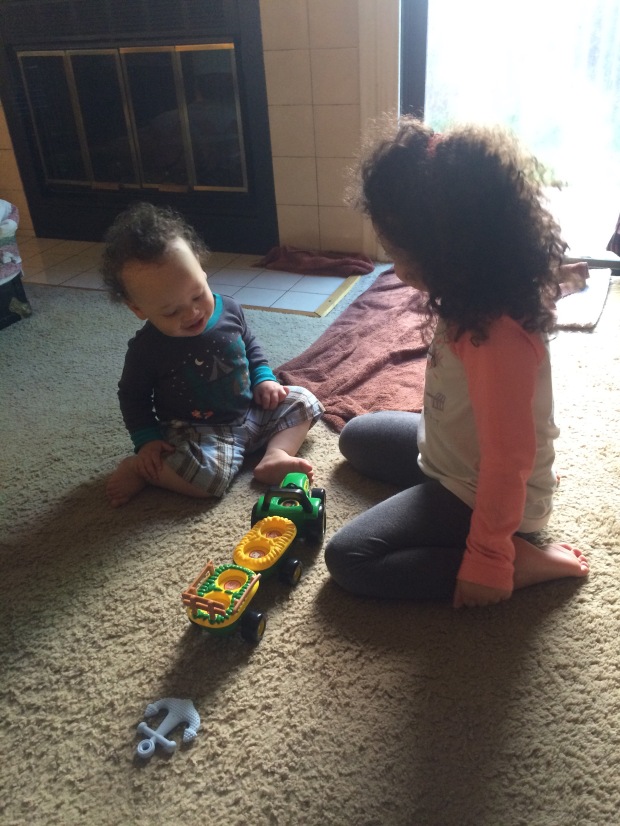 And then here they are playing together on the floor, and I start to feel that maybe we did it right and it’s just hard for everyone who walks the road for different reasons, but God, they’re beautiful aren’t they?